I have a 4th level Sasquatch 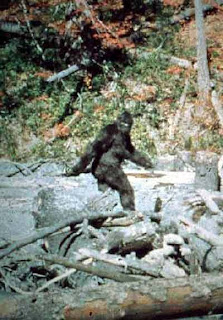 I'm changing the races.
Earlier this week I had a thought and it has snowballed.
This is the new lineup.

I'm also thinking of changing the way stats are rolled up instead having racial modifiers. There are still 18 dice but different races have them allocated in different ways. For example a Minotaur might roll 4 dice for strength and constitution and 2 dice for Intelligence and charisma and 3 dice for Wisdom and Dexterity. Or something like that.
Humans would roll 3 dice for all the stats.

Sasquatch: Elusive solitary ape folk, Sasquatch are often very wise and usually smell pretty bad.
Method: 4 d6 for Wisdom/ Strength, 3d6 Constitution/intelligence; 2d6 Dexterity/Charisma.
Special: Blurry. +2 to all stealth related saves. Sasquatch are hard to see at a distance and have a 4 [15] armor class against all ranged weapons, furthermore, scopes and other technological aim enhancement devices do not work on Sasquatch
Posted by Aos at 7:13 PM