Sometimes I start a-keyin' and things a- gotta change. In this case I added some train tunnels, blocked, open and partially blocked to the Under-vale map from this post. There is a nearly working engine somewhere in the deep and i love the idea of pcs spending a couple of sessions fucking with a train. The tracks, of course, lead off the map.

Here is the new version of the map, train stuff is at the bottom. 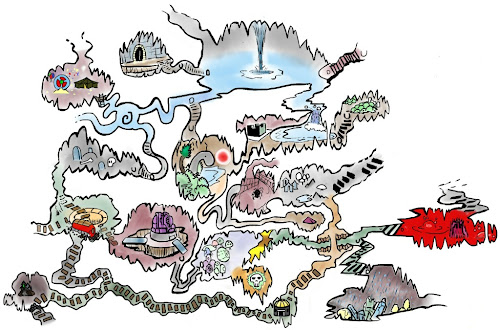 This is the sort of paragraph that should maybe be on the character sheet, because players in my experience, as a rule, do not read setting material. My hope is that a short paragraph explaining a bit about the world and the character's place in it, will lead to further interest and effort. At the very least they will know why everybody doesn't like dwarfs and why dwarfs don't like gnolls. The full article is a couple thousand words long and will see the light of day with the final pdf. This paragraph is more or less the abstract/summary of that.

HOW IT WENT DOWN THEN, AND HOW IT IS NOW:

After a long period of peace and prosperity, the dwarfs unknowingly raised a tyrannical necromancer to the throne. After a period of manipulating the prejudices of the population, King Wound the Last declared war on literally everyone; most of the dwarfs went along with it out of loyalty, but a sizable minority resisted.

The rebels were persecuted forced to flee the dwarf lands. Their descendents are all that remain of the dwarf people in the present era.

The dwarfs that stayed loyal to the evil necro-king morphed, over the centuries, into gnolls, which resemble the dwarf god of death, Kur. When the king was assasinated, at last, 500 years later, the gnolls fought amongst themselves or scattered; faced with the sudden resurgence of motivated and savage local resistance, the empire collapsed overnight.

So dwarfs are still around but everyone blames them for the Gnolls and the necro empire and the common cold.

Gnolls are still around, they occupy the former homelands of the dwarfs, but nobody knows how, or if they reproduce.